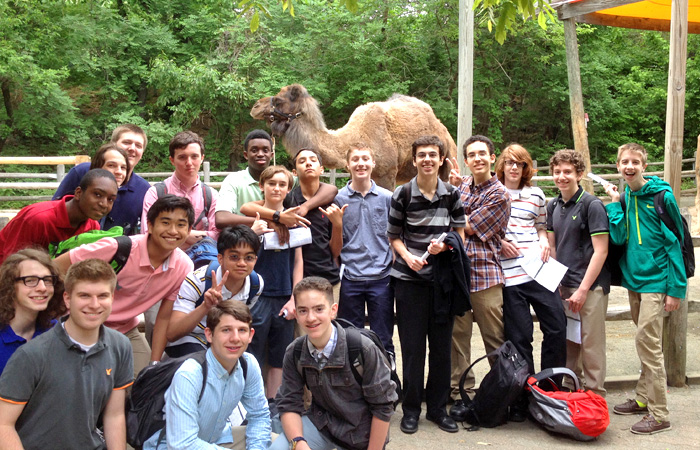 Above: The Classics Club poses for a photograph in front of the Bronx Zoo's camels (cameli) during their May 13 visit.

On Wednesday, May 13th, 19 members of the Regis Classics Club traveled to the Bronx Zoo to see the animals—and discuss them in Latin. The fifth annual "Iter Zoologicum," sponsored by the New York Classical Club and organized by Patrick Burns '94, invited participants to consider the lions, tigers, and bears of the vivarium (the zoo) in an entirely new light.

"Latin is not just a language to be read on a page," explained Burns, who is completing his doctorate in classics at Fordham University. "Like any other language, Latin is a means of communication, and a prism through which we can experience the world in a different way. The Iter Zoologicum is an exciting and fun opportunity for Latin enthusiasts to actively employ the language in a unique way."

Together with David Bonagura '99, Latin teacher and Classics Club moderator at Regis, the Regians began their foray into the animal kingdom on the subway, where they looked at Latin dialogues and vocabulary pertaining to rebus animalibus, from apes (simii) to wolves (lupi). Once they arrived at the zoo, they visited first with the camels (cameli), an encounter made even more exciting on "hump day." They then saw the zoo's male lion chasing his tail in a circle (leo caudam suam in circuitu petit). 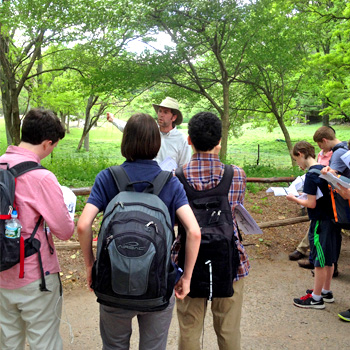 From there the Regians journeyed to the Asian Plain, where they met the rest of the group under the leadership of tour guide John Kuhner '94. Kuhner led them in an introductory Latin speaking exercise called "Quid videtis?" ("What do you see?") The students began to describe the natural scene before them using the accusative case.

Then they visited the giraffes and compared what they saw with St. Isidore of Seville’s seventh century Latin description of the animals. Isidore called them camelopardi, which literally means "camel leopard." Kuhner pointed out to the group the reasons for the discrepancies between how the giraffes appeared before them to Isidore's account. The students also learned that giraffes made their first appearance in Rome during Circus Games sponsored by Julius Caesar in 46 BC.

(Pictured: Tour guide John Kuhner '94 leads the group of Regians on a Latin speaking exercise through the Bronx Zoo.)

The Regians also traveled past the zoo's "Mouse House" (Domus Murum), pausing to survey Horace's embellished account of one of Aesop’s fables about mice. After they waved goodbye to the peacock (pavo) that seemed to follow the group around the entire Asian plain, the group walked to nearby Pugley's Pizza for dinner, which was generously provided by the New York Classical Club. Freshman Alessandro Colangelo happily declared that the pizza "was the best I have eaten in my life."

On the subway ride back home, junior Franz Nardone expressed the sentiments of the Regians who attended this unique trip. "At the zoo, we were able to apply our Latin knowledge to something we could actually experience, which I personally found quite exciting. I have always enjoyed the zoo, and the fact that the tour was in Latin made it all the better." 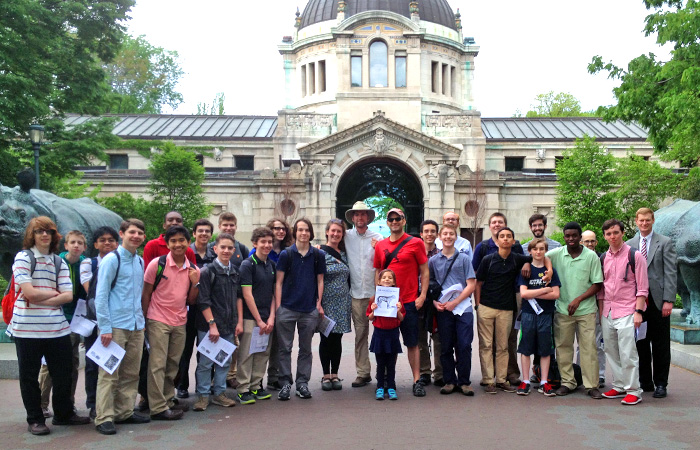 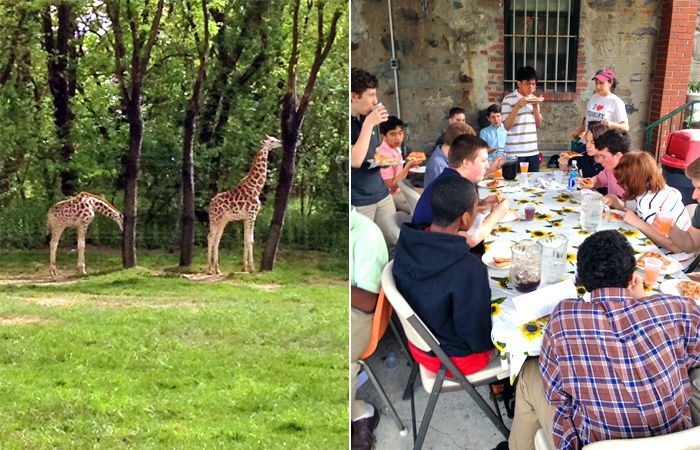 Above Right: After their visit to the Bronx Zoo, the Regis Classics Club stopped for a pizza dinner generously provided by the New York Classical Club.