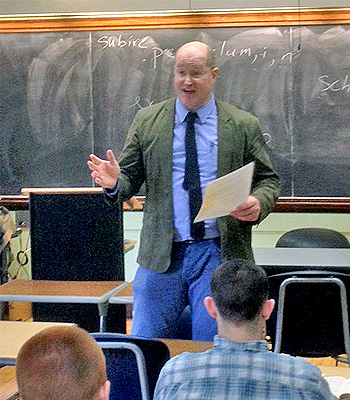 Dr. Matt McGowan '89, Associate Professor of Classics and Director of the Honors Program at Fordham University, served as guest lecturer for the junior and senior Latin classes of Mr. Dave Bonagura '99 on March 9 and 16.

For the junior class, Dr. McGowan led the class in a translation of a passage from Ovid, and then discussed Ovid's works which were composed during the final years of his life in Pontus. The latter was the subject of McGowan's first book, Ovid in Exile (Brill, 2009).

Along the way he also led the juniors in some brief exercises in spoken Latin, including—at one student's request—how to say "ice cream" in Latin.

(Pictured: Matt McGowan '89 discussing the Classics with a class of Regians.)

For the senior class, Dr. McGowan introduced the young men to the 16th century Jesuit Jacobus Pontanus, who was instrumental in establishing the Society's early program of liberal arts education. The seniors read and translated one of the dialogues that Pontanus had composed in order to teach the Jesuit seminarians and lay students how to speak Latin.

McGowan found the trip back to 84th Street fulfilling. "It was simply wonderful in the truest sense of the word. The boys are full of wonder and life and obvious curiosity about Latin: where it fits in to what they already know and are in the process of learning."

As a student at Regis, McGowan was first introduced to Latin by Mr. Béchard, now Fr. Dean Béchard S.J.

"He is an extraordinary man: learned, gentle, and wise, who also taught me Greek and has been among the most influential people in my life. He's now an expert on St. Paul and teaches at the Pontifical Biblical Institute in Rome. I hope to see him this summer when I take my students there."

McGowan remarked that Regians today remain as decidedly interested in learning as they always have.

"I was talking to the seniors about a 16th century Jesuit humanist from Germany, and when I asked for some historical context, several hands shot up eager to identify the Protestant Reformation. I don't think you find that many places, and it's certainly heartening to see at Regis."

Bonagura was delighted to bring McGowan's knowledge into his classroom.

"Matt and I have been friends for years," said Bonagura. "I have seen him teach, and he is one of the greats. I am glad to be able to bring his expertise, enthusiasm, and vast experiences in the world of classics to my own students here at Regis."

Classmate James Koehne '15 concurred. "Professor McGowan has an impressive command of all things Latin. I am very glad we were able to hear him for a day."

McGowan stressed the benefits of students continuing to expose themselves to Latin.

"It's good for the mind and food for the soul; it fosters logical reasoning and abstract thinking about language; it's still the language of the Church with particular resonance for Catholics; it's inherently beautiful and worthy of our contemplation."

"But perhaps most of all," added McGownan, "it's the key to a great conversation, the conversation of the west if you will. Without Latin you can't really participate and will be left out. I'm not saying that you won't survive without Latin; history has already proved otherwise. I am saying that your experience of the world will be poorer, and as educators we don't want that for our students. We prefer to enrich them, and Latin is an integral part of that enrichment."