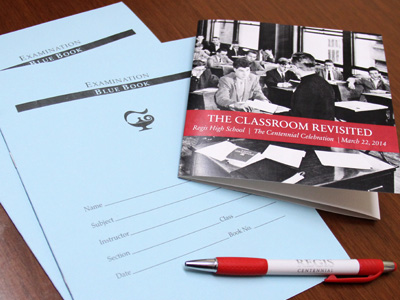 On Saturday, March 22 Regis High School hosted a special version of the annual Classroom Revisited. In honor of the Regis Centennial, a number of prominent Regis alumni presented a class in their area of expertise. They were joined by current and former faculty members for a day of education and career insights. Over 200 guests attended the day-long event, believed to be a record number of attendees for a Classroom Revisited event.

(Pictured: The Classroom Revisited event program, along with a "blue book" and a commemorative Centennial pen provided to guests for note-taking)

The morning began with guests arriving for registration and a continental breakfast. Attendees received an event program, a commemorative Centennial pen, and a "blue book" for note-taking. Much to the relief of many of the alums in attendance, the blue books were not used for pop quizzes at the end of the lectures.

On a day when alumni revisited the old routines of high school life, they were also exposed to some of the new routines and traditions at Regis. While some classrooms were in use educating alumni, others were in use educating REACH students. REACH program participants could be seen in action throughout the day. They were gathered in the cafeteria during the early morning breakfast, passed by Classroom Revisited registration on their way to the chapel for their weekly Saturday morning prayer service, and ate lunch alongside alumni, parents, and friends during the intermission between morning and afternoon sessions.

The first session that started the day featured the following presentations: Covering National Security in an Age of Secrets, by Mark Mazzetti '92 (National Security Correspondent for The New York Times) and Jim Sciutto '88 (Chief National Security Correspondent for CNN); Regis and the Society of Jesus: The Founding of a School that Returned the Jesuits to Their Founding, by Fr. Anthony Andreassi, C.O. (History Teacher & Regis Historian); From Grammar to God, by Mr. Edgar (Ned) Jackson (Former Latin & Languages Teacher); and Latin in 21st century USA, by Dr. Fernando Gomez Herrero (Latin & Spanish Teacher). 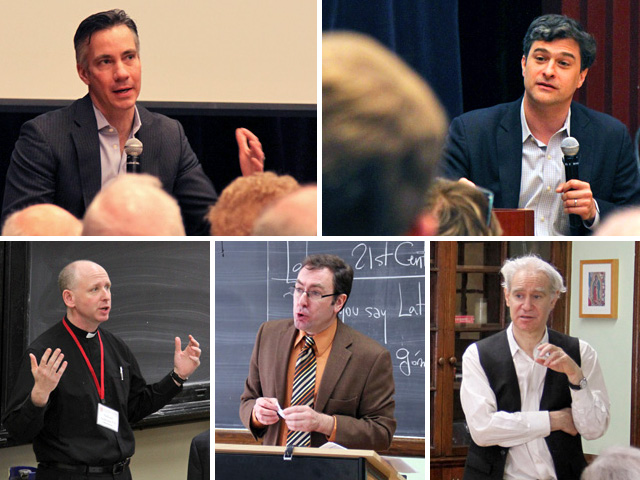 Next, guests proceeded to their second morning session presentation. Those sessions included: Reflections On Changes in the Law Over the Last 50 Years, by Hon. John G. Koeltl '63 (U.S. District Judge for the Southern District of New York); Meditation in Action, by Dr. Eelka Lampe (Teacher of German and T'ai-chi ch'üan); Introduction to Mandarin Chinese, by Mr. Pedro Acosta (Language Teacher); and Part II of Ned Jackson's From Grammar to God. 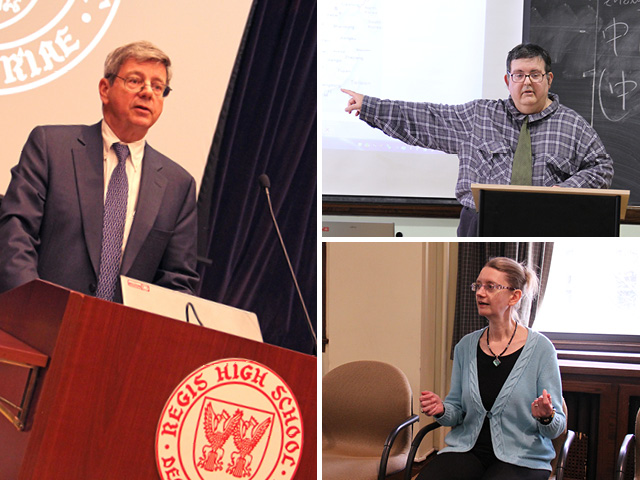 A brief lunch break gave guests the opportunity to discuss the morning classes before proceeding to the first afternoon session which included the following presentations: Public Service: Reflections on a Career at the National Institutes of Health, by Anthony S. Fauci, M.D. '58 (Director of the National Institute of Allergy and Infectious Diseases); Life As A United States Ambassador, by Ambassador Timothy A. Chorba '64 (Former U.S. Ambassador to Singapore) and Ambassador William B. Wood '68 (Former U.S Ambassador to Afghanistan & Colombia); and Loose Shorts: Revisiting a Few of John Loose's Favorite Short Films, by Mr. Joseph Quinn '04 (English Teacher). 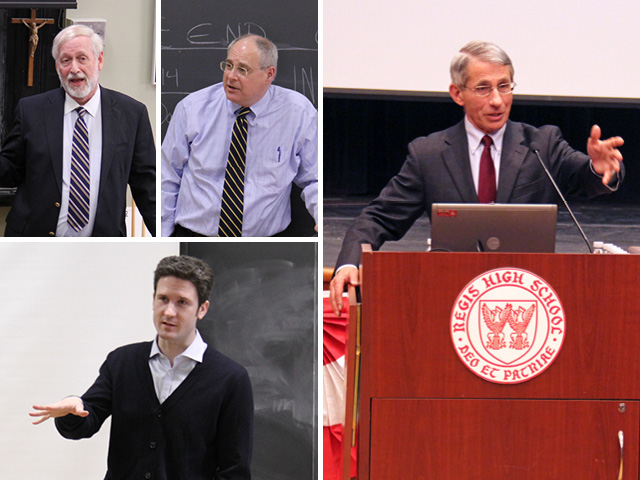 The final session of the day included the following: Our National Approach to Terrorism: What Has Changed and What Hasn't, by Patrick J. Fitzgerald '78 (former Federal Prosecutor, U.S. Department of Justice); Writing Life and Death: Exploring War, Disease and the American Catholic Experience Through Fiction, by Phil Klay '01 (author, Redeployment) and Matthew Thomas '93 (author, We Are Not Ourselves); The Standard Model & Things Smaller Than the Atom, by Mr. Frank Barona (Science Teacher); and Part II of Joseph Quinn '04's Loose Shorts. 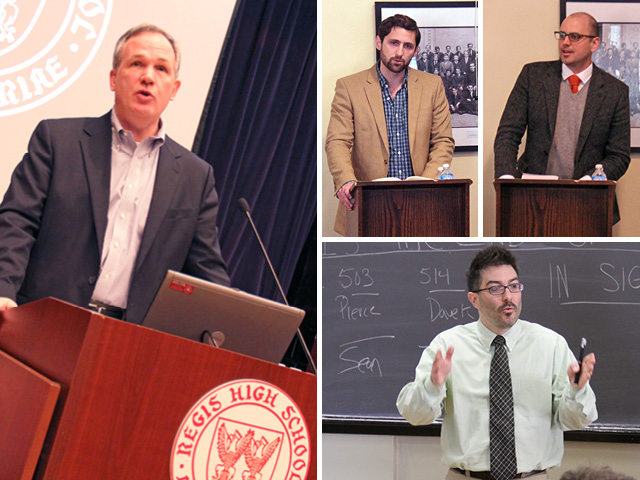 "The presentations were excellent. Just superb," said Rose McGough P'93, who attended the day-long event with her husband Jim McGough '52 P'93. "I really appreciated that the presenters incorporated a question and answer component to their sessions, It really opened up the talks and provided more scope."

The McGough's had the opportunity to attend the Writing Life and Death session held by Phil Klay '02 and Matthew Thomas '93, who was a classmate of their son, Matthew. "The loyalty among alumni, classmates, and Regis families is so apparent. It's unparalleled anywhere else."

Jerry Kappes '52, a former Regis faculty member, was also in attendance. During his tenure as a teacher at Regis, Patrick Fitzgerald '78 was one of the students he taught. "He was terrific," said Kappes of Fitzgerald's session. "So many stories and so much information. So well informed."

Robert Logan '65 attended Classroom Revisited with his sons, Andrew and John. "Dr. Fauci '58 really represented the Jesuit way," said Logan. "He stressed the humanities and how they were so integral to the core of his education. Only a Regis grad could be so well rounded, to be such a great speaker and be so well versed in science." He added, "It was refreshing to see professionals talking about such serious subjects in such a family-like atmosphere. It speaks to the uniqueness of a Regis education. This was one of the highlights of the year."

Bobby Heaney '02 and Grace Roessler also attended sessions throughout the day. They were both moved by Klay '02 and Thomas '93's Writing Life and Death session. "They wrote about such heavy subject matter, and the stories they shared were very personal," said Heaney.

Heaney and Roessler traveled that morning all the way from Boston to attended the event. "We were very excited to be a part of the Centennial year celebration, and this was a great event to choose to come to."

"As an outsider, it was an impressive range of speakers today," said Roessler. "They are all instilled with a sense of passion and confidence in their fields of practice."

"The presenters showed a range of how dynamic and successful a Regis grad can be in such a wide spectrum of careers," said Heaney. "Regians are great writers, educators, public servants, and so on, not just lawyers or doctors… though we have plenty of them too!"