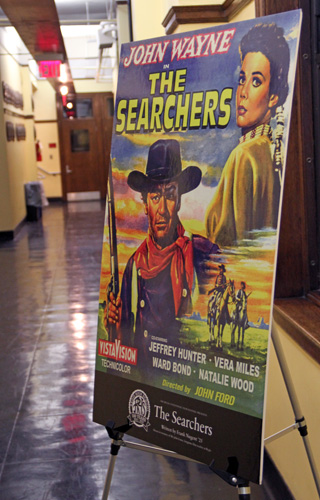 On Friday night, a gathering of alumni, parents, students, and friends of Regis High School arrived at the second floor conference room to find it transformed into Regis' very own movie theater—complete with a large movie screen, a newly installed sound system, and an abundance of freshly popped popcorn, boxed candy, and soft drinks. The occasion was the first in an upcoming series of events dubbed The Regis Centennial Film Festival, a collection of movie screenings designed to showcase films featuring the works of Regians in the film industry.

Friday's screening showcased The Searchers, a 1956 film directed by John Ford. The film, which is based on a 1954 novel by Alan Le May, is set during the Texas-Indian Wars. John Wayne stars as a Civil War veteran looking for his abducted niece, played by Natalie Wood. Renowned film critic Roger Ebert once referred to Wayne's character in the movie (Ethan Edwards) as "one of the most compelling characters Ford and Wayne ever created."

The film's connection to Regis is made through Frank S. Nugent, '25, who wrote the film's script. Nugent made his career as a film critic and screenwriter, a career that began in 1929 and lasted until his death in 1965.

Beyond the film's distinction as having been written by a Regian, the movie was also shown in memory of Mr. John Loose, longtime film teacher at Regis, who passed away this past November. The Searchers was a perennial favorite in Mr. Loose's classroom.

John Loose’s career engrossed him in film from start to finish. His career began in the 1960’s working as a professional actor, performing onstage with many well-known actors, including Henry Fonda, Walter Pidgeon, and Thomas Mitchell. He also crossed paths with Joan Bennett, Rosalind Russell, and Maureen O’Sullivan.

Mr. Loose transitioned to education in the 1970's, serving as a lecturer in film and television studies at Rutgers University. He arrived at Regis in September 1978 and spent the ensuing 35 years as the school’s film teacher, teaching countless Regis students until his retirement at the end of the 2013 academic year. (Read more: Regis Mourns John Loose, Longtime Film Teacher | November 29, 2013). 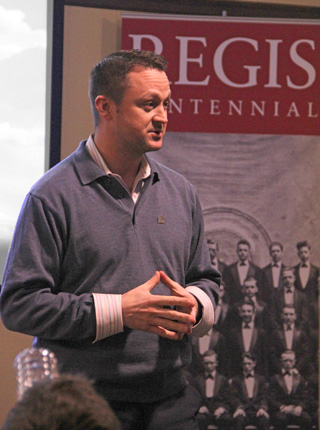 Christian Talbot '93, a former faculty member, colleague, and friend of John Loose, returned to Regis for the film night to provide a brief reflection on Mr. Loose prior to the film screening. Talbot, who currently serves as the Head of School at Malvern Preparatory, highlighted what it was like to be a student in Mr. Loose's classroom.

"When you think about the imprint John left on Regians," said Talbot, "you think of how he helped every student in the classroom think about film critically. And despite his incredible insight, he was far more interested in knowing what you thought about a film."

(Pictured: Christian Talbot '93 addressing the audience prior to the screening of The Searchers.)

The film screening's audience included Dan and Gretchen McGuire P'07, who knew John both as Regis parents and as a neighborhood friend. Their son, Christopher, studied film with Mr. Loose both as a sophomore and as a senior, during which time he analyzed the works of Stanley Kubrick with Mr. Loose as part of a senior year elective course.

For the McGuire's, their relationship with Mr. Loose extended well beyond the walls of the classroom. "He was a welcoming neighborhood denizen," said Mr. McGuire. "A real good friend. Always interested in chatting over a cup of coffee and never without his wit and humor."

Francis Fallon '00, a former student who developed a close friendship with Mr. Loose, was also in attendance for the movie screening on 84th Street. Fallon authored a reflection on John Loose following his death this past Fall. "John was as much of a student as he was a teacher," said Fallon. (Read more: Reflections on John Loose | December 2, 2013).

The remaining Centennial Film Festival schedule is in the process of being finalized. Please check regis.org/2014 for an updated listing of film festival dates, along with the dates of all upcoming Centennial events. 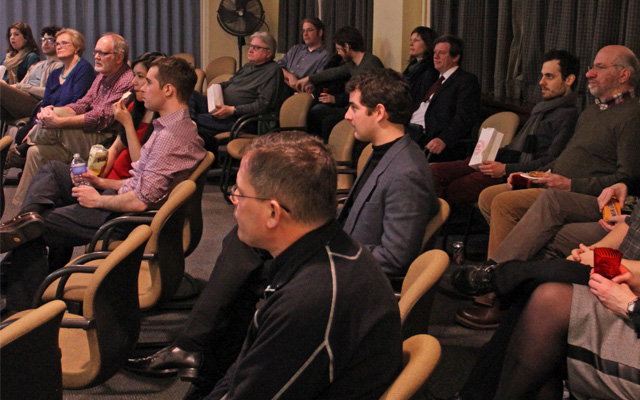 Above: Alumni, parents, students, and friends of Regis High School gathered in the second floor conference room and awaited the night's featured presentation.