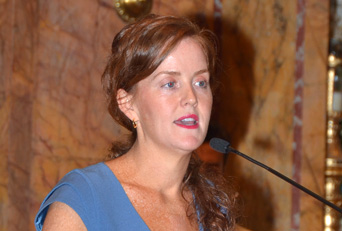 Regis High School's Assistant Principal, Kristin Ross, has been selected as the next Principal of Loyola School. Ross will make the transition to her new role across 84th Street in July 2014.

Ms. Ross has served in the Regis academic administration since 1999. She earned her Bachelor of Science degree from James Madison University, two Masters degrees from Columbia University, and will complete her Doctor of Education degree from the University of Pennsylvania this spring. Ms. Ross has previously served on the New York Province Secondary Education Advisory Board and currently serves as a member of the Board of Trustees for Dominican Academy and Saint Peter's Preparatory School.

"In ways similar to students who leave their home communities to venture to Regis, I, too, have been graced with an opportunity to set off along a new path of growth and learning," said Ms. Ross. "I have a very real faith in God’s will, and am wholly grateful to take the next steps along my path as part of the Loyola School community."

Please join us in wishing Ms. Ross success in this new endeavor and in her continued career as a committed Ignatian educator.