When Fr. Mike Rizzo ’77 preaches, new members of his parish sometimes end up with confused looks on their faces. It’s not because Fr. Rizzo’s homilies are esoteric or unapproachable. Catholics just aren’t used to a priest telling a story about his wife or his son to begin his sermon.

On June 6, 2020, Bishop Kevin Vann ordained four new priests for the Diocese of Orange at Christ Cathedral in Garden Grove, California. Michael J. Rizzo, a 60-year-old widower, father, and business executive, was among them and now serves as a parochial vicar at Saints Simon and Jude Catholic Church in Huntington Beach.

“I retired to the priesthood,” Fr. Rizzo jokes.

It’s a busy retirement. Masses, baptisms, weddings, funerals, counseling sessions, ministering to the sick, and the many other varied responsibilities of a parish priest pack his schedule. But Fr. Rizzo is thrilled with this radically new stage of his life, and his journey to this holy calling is as inspiring as it is unusual.

In one sense, Fr. Rizzo’s path to the priesthood began on the worst day of his life. His beloved wife, Rosemary, a two-time cancer survivor, died unexpectedly of a heart attack at their home in Lake Oswego, Oregon on February 28, 2012. Her passing devastated Mike and their son, John, who was in the middle of his freshman year at Claremont McKenna College. Mike had planned to retire soon after a successful career in business, and he and Rosemary were looking forward to traveling and eventually moving close to wherever John settled after college.

“We had a plan, and I didn’t have any independent plan,” Fr. Rizzo says. “It was all part of my wife and I as a team in this plan, and so that plan was obviously shot.”

Still, in the aftermath of Rosemary’s death, the thought of entering the priesthood had not entered his mind. But the seed had been planted much earlier.

Mike Rizzo grew up on Staten Island in a service-oriented, Catholic family. His father worked as a New York City firefighter, and his mother eventually joined the New York City Police Department as a civilian employee. He credits his mother with pushing him to consider Regis after the principal at St. Teresa’s recommended he apply. The decision to make the 90-minute commute each morning and evening completely changed his trajectory, Fr. Rizzo says. “Everything in my life really started with the opportunity that I had at Regis.”

Regis also deepened Rizzo’s faith. The Theology curriculum — a far cry from the religion courses he took in Catholic grammar school — expanded his understanding of and intellectual engagement with Catholicism, and he has wonderful, vivid memories of school retreats. In between classes, he used to duck into the empty Chapel of the Sacred Heart to play the organ. But during his time on 84th Street, Rizzo never felt pulled to the priesthood. His mind was set on becoming a lawyer.

Rizzo went on to Cornell and then the University of Michigan Law School. He began his legal career in New York and married Rosemary. The couple initially struggled to have children, and in the early 1990s, Rizzo started to have conversations about becoming a deacon. But soon Rosemary became pregnant with John, and the bank Rizzo worked for promoted him to a position that required the family to relocate to Oregon. With a new baby, a busy job, and a move to the west coast, any plans to get more involved with the Church had to be placed on hold.

Rizzo went on to great success in his professional career, becoming president and chief operating officer of a subsidiary of US Bank and later the general counsel and chief operating officer of ALEKS, an online adaptive learning service. As he began to contemplate retirement with Rosemary, Rizzo again briefly entertained the idea of becoming a deacon before Rosemary passed away, at which point his focus became the well being of his son.

Eventually, Rizzo found himself feeling unfulfilled at work for the first time in his career. He decided to undertake something he had always wanted to try but never could carve out time for: the Spiritual Exercises of St. Ignatius. His professional responsibilities prevented him from doing a full 30-day retreat, but Rizzo signed up for a weekly program at a local parish. At one point during the Exercises, he found himself, for the first time in his life, feeling the urge to become a priest. He quickly dismissed the notion as ridiculous.

“I’m old,” Rizzo told himself. “I’m not very holy. The extent of my holiness was I went to Mass my whole life.”

Still, he felt spiritually renewed by the Exercises, so he decided to do them again. On his second go-round, the call to become a priest grew even stronger. Rizzo brought this up to the priest leading the Exercises, expecting him to agree that the idea was silly. “You need to pursue that,” the priest told him. (Read more about the impact the Spiritual Exercises had on Fr. Rizzo.)

So he did. After much prayer and ensuring his son felt comfortable with the decision, Rizzo entered the seminary, diving into his studies and formational training. “Honestly, if you ever get the chance, the seminary is like a six-year sabbatical,” Fr. Rizzo jokes. “I loved it.” Of course, he wasn’t a typical seminarian. Twice the age of most of his peers, he served at times as a father figure to the young seminarians, offering advice based on his much more substantial life experiences. He also often found himself advising the rector on legal questions or human resources issues facing the seminary.

He graduated from the seminary in May 2020, was ordained the following month, and began his ministry at Sts. Simon and Jude. Any lingering doubts about his atypical midlife career change quickly dissipated. “It is astonishingly comfortable,” Fr. Rizzo says. “It’s like I was made for it. I don’t know how you say that without sounding arrogant. I’m not, but it just feels right.”

While Fr. Rizzo doesn’t have as much experience in ministry as most priests his age, he brings to his new vocation a depth of life experience that he constantly draws upon while serving his parishioners. When he counsels a couple struggling in their marriage or one preparing to be married, he cites examples from his relationship with Rosemary. When he ministers to the sick or comforts the bereaved, he remembers his wife’s battles with cancer or his own grieving process after her death. And, yes, his homilies regularly feature stories about “my wife” and “my son,” which by now most regular church-goers in the parish have come to expect.

“I don’t quote St. Thomas Aquinas in my homilies,” Fr. Rizzo explains. “I am a down to earth guy who preaches the way I wanted to be preached to when I was sitting in the pews. I draw connections to every element of my life.”

Almost a decade after Rosemary’s passing, Fr. Rizzo loves this new stage of his life. He trusts that his wife is in heaven, he lives a short drive from his son and daughter-in-law, and he feels invigorated and fulfilled by his ministry.

“It’s just a pleasure to do what I do, and I don’t think it’s sort of the new car smell of this. I think it’s actually that I really like this, and I can’t fathom not liking it.”

Ask him about the future, and Fr. Rizzo, referencing his father’s work for the FDNY, talks about engaging in active ministry for at least 20 years before eventually slowing down and spending more time with his family.

“I can put my 20 in, work until I’m 80, and still enjoy my grandkids,” Fr. Rizzo says. “God blessed me to do that, and that will have been a pretty amazing end to my working career.” 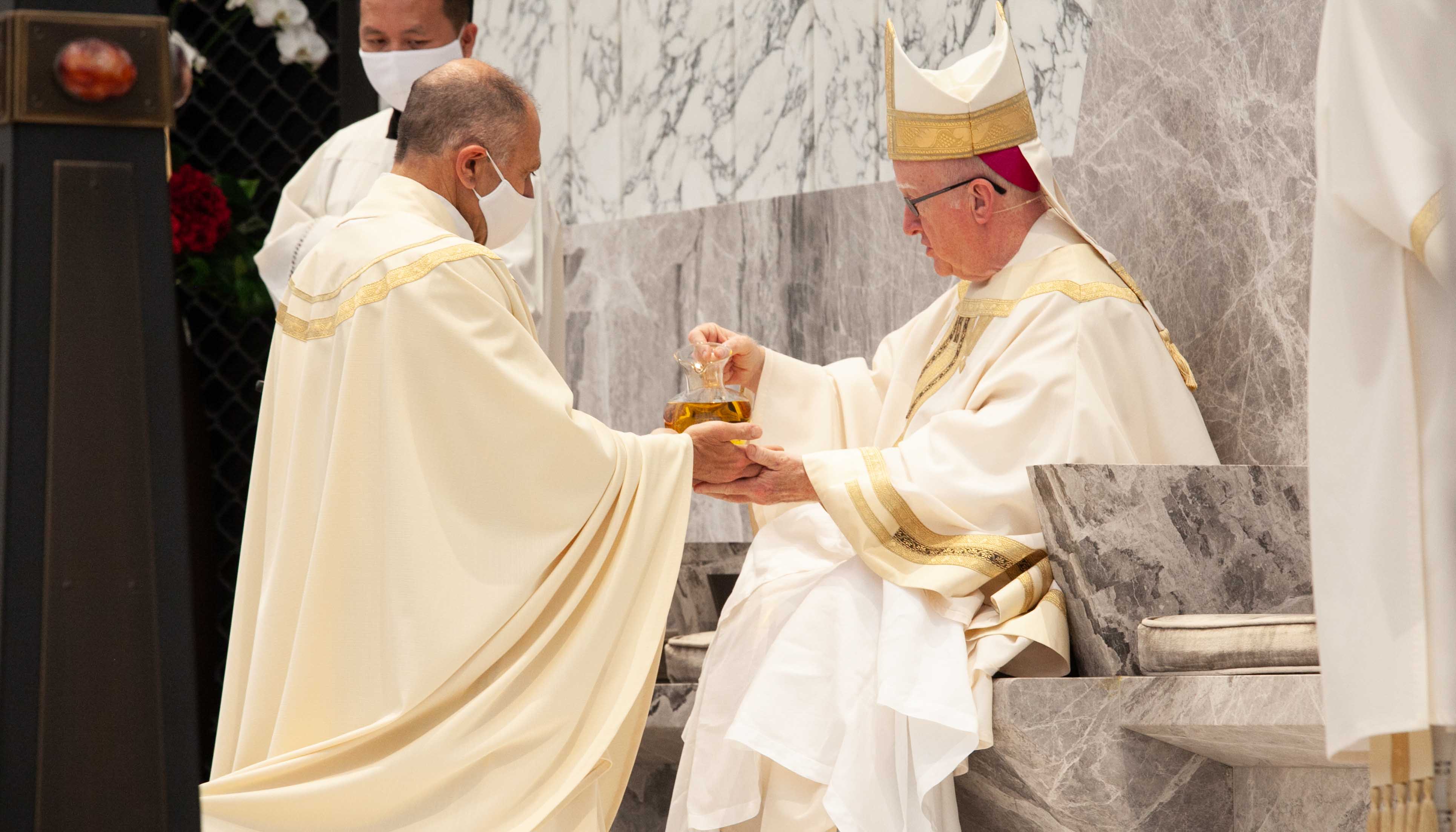 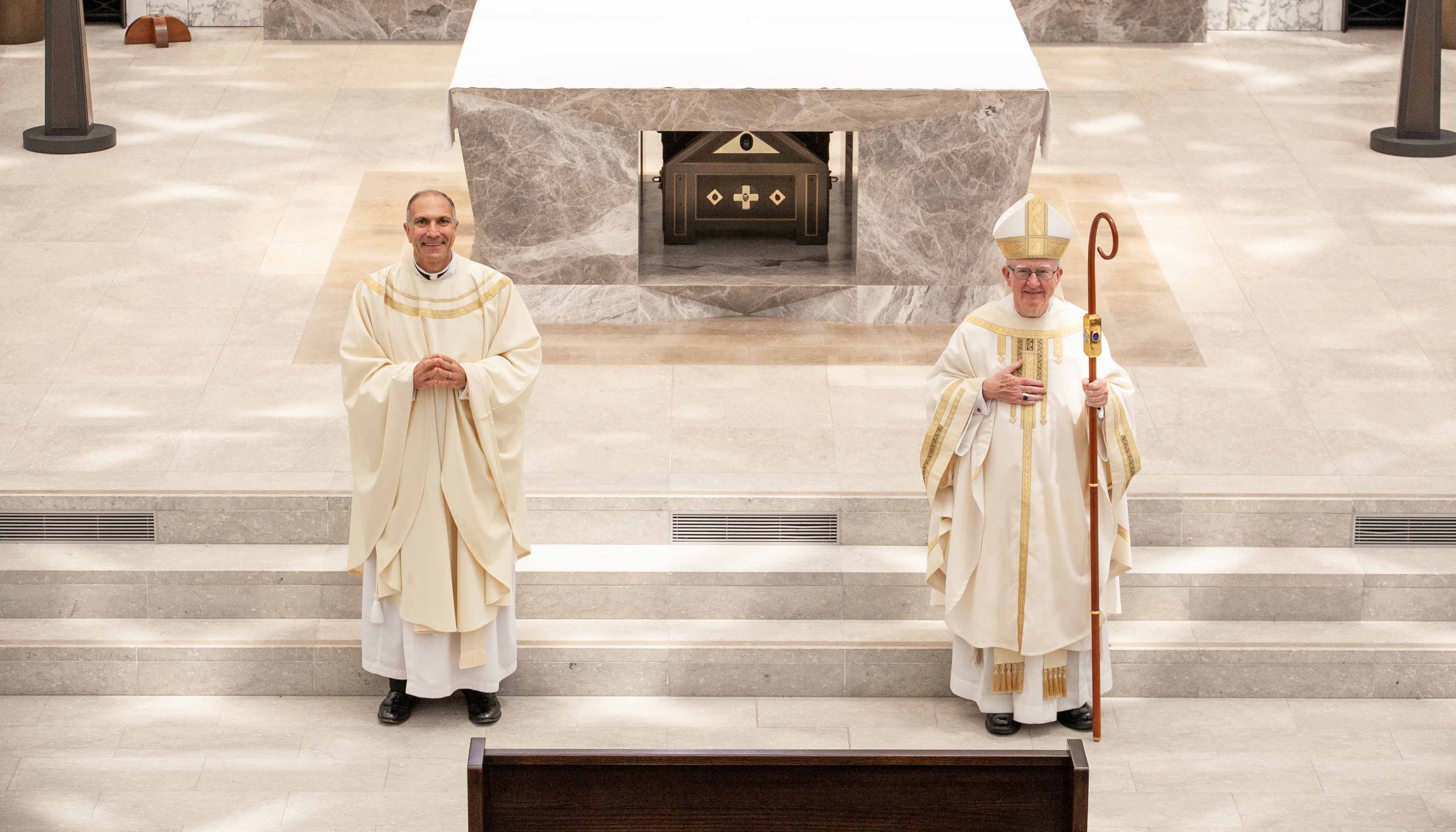