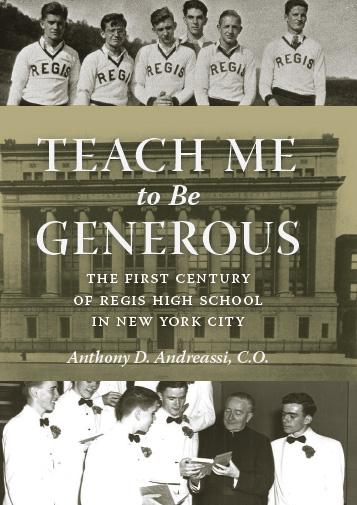 On Tuesday, January 21, Anthony D. Andreassi, C.O. will showcase a history of Regis High School with a presentation and book signing. The event will feature a reading of a few select stories from Teach Me To Be Generous: The First Century of Regis High School In New York City. The book, which Andreassi authored, is the most comprehensive account of the first 100 years of Regis. The book signing event coincides with the book's official release.

The event is one of the first in a series of Centennial themed events scheduled to celebrate the rich history of Regis High School, its founding family, and the family of parents, alumni, and friends that have supported the school through its first 100 years.

Tickets for the event are limited, so pre-registration is required. Reserve your ticket here.

Teach Me to Be Generous tells the remarkable story of Regis High School, the Jesuit school on New York’s Upper East Side that was founded in 1914 by an anonymous donor as a school for Catholic boys whose families could not otherwise afford a Catholic education.

Enabled by the philanthropy of the founding family for nearly a century, and now by alumni and friends carrying on that tradition of generosity, Regis has been able to provide tuition-free, all-scholarship education for its entire history. It also holds the distinction of being the first free-standing Jesuit high school in the United States, with no connection to any Jesuit colleges or universities.

Regis High School’s unique story is told by an engaging storyteller and historian who has taught at the school for more than ten years. Father Andreassi offers captivating glimpses into the lives and daily experiences of Regis’s students and faculty, while chronicling the development of the school’s educational philosophy and spiritual approach in its first century.

"When Father Judge asked me to consider writing the history, I jumped at it," said Andreassi. "This whole project has been a labor of love for me. Being able to teach a current generation of Regis students while learning so much about the experience of past ones has brought so much joy to me both as a teacher and as a historian. Now that the book is done, I am so happy that others will be able to learn more about what makes Regis such a unique school both in the past and in the present."

Filled with entertaining anecdotes alongside wider historical context and illuminating statistical analysis, Teach Me to Be Generous tracks Regis High School through the decades of the twentieth century to the present day—from the generosity of a devout Catholic widow, through the Depression and World War II, to changes in demographics of the Catholic community and shifts in the landscape of Catholic education in New York City.

During the school’s first few decades, Regis admitted thousands of Catholic boys, mostly from poor or lower-middle-class families, helping prepare them for success in college and leadership positions in the professions. Because of the closing of dozens of urban Catholic schools and the general decline of the quality of New York City’s public schools, in more recent years the school has faced the challenge of remaining true to its mission in offering an education to Catholic boys "who otherwise would not be able to afford a Catholic education."

In the book's foreward, His Eminence Timothy Michael Cardinal Dolan writes, "In the story of Regis High School lies a singular history of Catholic philanthropy to rise out of the Gilded Age. That story deserves to be told."

Robert Emmett Curran, Professor Emeritus of History at Georgetown University writes, "In this richly sourced and well-told history, Anthony Andreassi captures in an engaging, upfront manner the change and continuity that constitute Regis High School’s first century—an institution unique in American Catholic education, from its anonymous founders, to its scholarship support of an intellectually elite student community of modest or lesser economic means, to its overcoming of opposition from the highest levels of the Society of Jesus to become an eminent success in achieving its mission."

Teach Me to Be Generous paints a vivid portrait of the first 100 years of this exceptional institution, and looks with hope and confidence to its future. Join us on January 21 to celebrate our storied history. Tickets for the event are limited, so pre-registration is required. Reserve your ticket here. 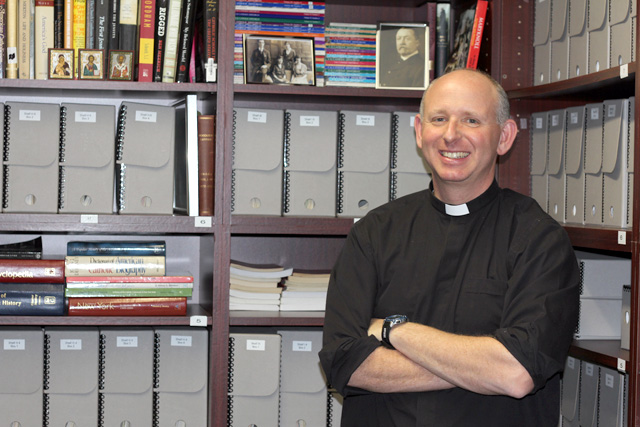 Above: Anthony Andreassi, C.O. in the Regis Archives Room. The room, located in the Regis Library, was opened in 2006 as a resource to preserve and chronicle items from the first 100 years of Regis.